Improve the lives of individuals, one person, one family at a time. 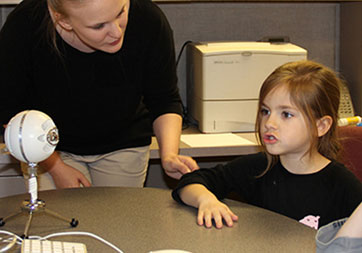 "We don’t have enough speech language pathologists to meet the demand."

According to Susan Latham, Director of the Master of Science in Speech Language Pathology program at Saint Mary’s College, speech language pathology is one of the most versatile careers.  “You can work anywhere from inpatient or outpatient hospital settings, to assisted living, to preschools and individual patients’ homes,” Latham said.  “Speech pathologists work with clients from beginning of life to end of life.” Latham’s career trajectory led her from the neonatal intensive care unit to an aural school helping with cochlear implants, to an early intervention setting.  She has also worked in both urban and rural school districts, as well as individual family homes, and served as an autism consultant and clinical supervisor prior to embarking on her academic career.